‘War is shit,’ said an anonymous S.A.S. officer once, ‘and anyone who says differently hasn't been close enough to it.’ With plenty of experience in photographing in war zones, Jeroen Kramer knows how true that statement is. ‘I portrayed war like something in a Hollywood film,’ he says. ‘I regret that now.’ In an attempt to capture something of the sentiments that battle releases in soldiers, Kramer photographed the graffiti that they leave behind on the walls of their toilets.

The three thousand inhabitants of Jolo, a volcanic island in the south-west of The Philippines, are primarily Muslims who live from farming and fishing. Ninety percent of Filipinos are Christian. Various Muslim groups are carrying on a struggle for independence on Jolo, some of which are alleged to have ties with Al Qaida. The Abu Sayyaf resistance movement has been responsible for a number of abductions and beheadings. Three hundred American commandos are stationed on the island, officially to train the Filipino army. The United States also pumps money into establishing non-Muslim schools.

The Sunni Triangle is inhabited by supporters of Saddam Hussein, who as a Sunni Moslem favoured his fellow Sunnis politically and economically. Because of the hate against the Americans and fear for Shiite domination, the region is the most dangerous in Iraq. For forty-eight hours the Dutch photographer Jeroen Kramer accompanied the 124th Brigade, from Miami, Florida, on patrol, who are responsible for security in the Triangle. For tactical reasons he was not permitted to use his flash. The Brigade has the same routine almost every day. Bombs along the roads are disarmed, snipers on the roof try to keep the rebels at bay, and the rockets fired at their Humvees must be answered with counter barrages. Although the shelling sometimes lasts for half an hour, it often remains unclear if anyone has really been hit.

Jeroen Kramer (Netherlands, 1967) has been photographing freelance since 2001 in the Middle East. He reported on the second Palestinian Intifada and the American invasion of Iraq in 2003. For Getty Images, de Volkskrant, The New York Times, Vanity Fairand others, Kramer has also worked in Africa, Afghanistan, Burma and The Philippines. Kramer won the Dutch Doc Award 2010 with his series ROOM 103. 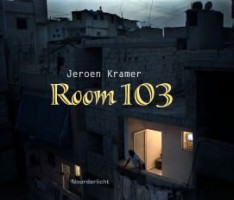