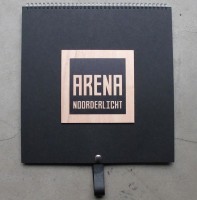 NOORDERLICHT 2016 casts a forensic look at the traces left behind in the landscape with ARENA running from 22 May through to 3 July at Museum Belvédère in Heerenveen. 21 artists from around the world unearth the stories that take place on and under the skin of the landscape.

We live in a time when our global culture has subordinated nature. It has become almost impossible to experience unspoilt land, no matter how far we direct our gaze. What remains once humanity and its thirst for action has left the stage, in search of ever-greener pastures?

ARENA is the prologue to the project series Landscape as Arena, which focuses on the decisive impact man has on the landscape. With his dominant creational force, man leaves an overpowering mark on the landscape: by living, working, and recreating on it, and by extracting raw materials from it on a mass scale. Through the continual exploitation of land worldwide, we see the landscape steadily changing. Every economical application brings new stories into the soil, but also into the oceans and the sky. They lie there, like layers of geological sediment, awaiting eventual exposure.

The traces man leaves behind in this way result from careless deeds as well as from unscrupulous actions. At one end of the spectrum we find the innocent residues of history, at the other extreme we see changes that are so radical that the future of our planet is at stake. Changes in climate make it painfully clear that the human impact has become far greater than we could ever have imagined. The current geological era is therefore often called the Anthropocene, the era in which the consequences of human activity become perceptible in the climate and atmosphere.

For ARENA twenty-one artists have been invited from around the world, showing with their respective images a part of the bigger story. The photographic series offer the public substance for reflection and make us aware of the fragility of the created landscape. At the same time, Noorderlicht demonstrates how engaged art can be inspirational, in the transition towards a more responsible way of dealing with our natural environment.

The exhibition shows, for example, photographs of the mining industry in Chile and its effects on the environment. We see the plastic floating in our oceans. Quarries intended to contain the radioactive waste from Fukushima. The sweltering rainforest and cold glaciers. But also photographs of Dutch dunes brought back to their original state, and images of – is it fictional or real? – a previously inhabited island given back to nature by man.