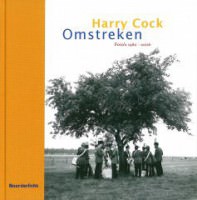 Portraits, industrial photography, architecture, still-lifes, landscapes, the ups and downs of everyday life: they are all there in the work of Harry Cock. Since 1980 Harry Cock has been working from his home town of Assen, not only for businesses and public authorities but especially for magazines and newspapers. He is a regular staffer on Noorderbreedte, the magazine for landscape, regional planning, art and cultural history for the North Netherlands.He enjoys a national reputation for his work for the Volkskrant. Although he travels all around The Netherlands for this daily newspaper (and with some regularity, outside The Netherlands too), most of his work is shot in the northern Netherlands. In that, Cock is one of the few 'Northerners' who publishes pictures of this region at the national level.

The ways in which people try to keep their bearings in changing situations is a recurrent theme in Cock's work. What is striking about this is his often nimble, humorous approach. Certainly when he turns his camera on the ups and downs of (and in) the urbanizing landscape, his visual language is extremely recognizable. In both black and white and color he has an almost poetic eye for the small things in life.

In 'Environs' Cock presents a selection from over twenty-five years of his work, concentrating on the photographs that he has made in the North of The Netherlands. Some of the photographs have been previously published, but at least as often they are pictures that have surfaced from his archive - to the surprise of their maker. They are photos that he had forgotten about, or that, in retrospect, turn out to show more than they revealed at first glance.Collectively they offer an overview of Cock's development as a photographer, and, sometimes in the background, sometimes in the foreground, they also reflect something of the changes that have taken place in Dutch society over the course of time.

In Cock's own words, it is "an exhibition about townspeople and country men, the countryside and construction, the road and the view. It is about what changes and what remains the same. And about how everything always turns out all right in the end."

The book Omstreken (Environs) will appear to accompany the exhibition, with texts by Marcel Möring and Eddie Marsman (Dutch).

The exhibition was opened by Marcel Möring, writer.