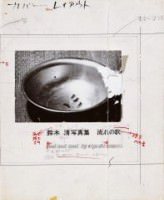 The borders of documentary photography

Kiyoshi Suzuki (1943 - 2000) worked for more than 30 years within a relative solitude. He welcomed the unexpected, the surprizes that can be so typical in photography. A man who planned his own path and followed his intuition. He played with life, a continuous moving inside the stories that life brings, connecting literature, music, theatre, religion, poverty, family in a meditative as well as an explosive, soulful way, always driven by a profound fascination for the fragility and integrity of the small and the humane.

Suzuki's early work from the late sixties and the early seventies has a mysterious quality. It is dark in imagery and content, sometimes obscure in the most positive sense of the word, meaning that already at his early age Suzuki understood the beauty of leaving things out. Soul and Soul from 1972 is his first book, self-published like almost all his books. It is arguably one of photography's most beautiful books. The images are taken in the mining area of Suzuki's childhood town and the book can be seen as an hommage to both the miners and to Suzuki's own growing up. Dark, calm and surprizing images. Soul and Soul is definitely a photographer's first book in a tradition of such works: La Banlieue de Paris by Robert Doisneau, The Destruction Business by Don McCullin, Homo Ludence by Fukase, Vietnam Inc. by Philip Jones Griffith and A Dialogue with Solitude by Dave Heath, all books that have in common this enormous quality and care about the photographs as well as the making of the book.

Kiyoshi Suzuki passed away in 2000, much too young. He left us eight books, with titles such as Soul and Soul, Mind Games, Street Shuffle, Finish Dying. Durasia. The work goes from intense classic black and white photography to an explosion of images and almost always it is in the books that Suzuki shows us the games he plays. He left behind many book dummies, often photocopied and many collages with small prints and handwriting.

It was in 1999 that Noorderlicht included Kiyoshi Suzuki in the large exhibition Wonderland. This exhibition was curated by Wim Melis (senior curator) and Machiel Botman (guest curator) and it showed the works from 30 photographers from many countries. Wonderland has since become a reference about this intuitive kind of photography. Noorderlicht has commissioned Machiel Botman to curate the exhibition of Kiyoshi Suzuki and Botman has since worked with the wife of Suzuki, Yoko and their twin daughters, Yu and Hikari. It has taken several visits to Yokohama to open up the large archive, the prints, the book dummies, the collages.

Composed by guest curator Machiel Botmanin cooperation with the Suzuki family and Noorderlicht.

Machiel Botman is a photographer, represented by Gitterman Gallery in New York, Gallerie Vu in Paris and HUP Gallery in Amsterdam. He co-curated Izis/Chagall for the Jewish Museum in Amsterdam and is currently curating, next to Suzuki, the exhibition Miyako Ishiuchi for Langhans Gallery in Prague. This exhibition, supported by The Japan Foundation, will open in the spring of 2008 and then travel within Europe.

'Noorderlicht might have landed one of thé photo exhibitions of the year. The work of Suzuki is obscure, moving, tender and dear.' De Groene Amsterdammer, Gustaaf Peek

The exhibition was opened by poet Maurice Buehler and Mrs. Yoko and daughters Hikari and Yu Suzuki. Hikari Suzuki posted pictures of the exhibition and her visit to Groningen on het blog: http://gu-gan.cocolog-nifty.com/blog/

'These are intriguing photographs. Rich in contrast and sometimes almost surreal. Suzuki knew how to be dramatic and theatrical without giving up the simplicity of the image or seeming affected. But the best thing about the exhibition by far is the book. [...] a publication that does justice to an artist both in form and content - one would wish that all photobooks were made with the same care and dedication.' Merel Bem, De Volkskrant, 12 March

Soul and Soul has been nominated by Markus Schaden for the election of best photobook 2007/08 which will take place during Fotofrühling Kassel.