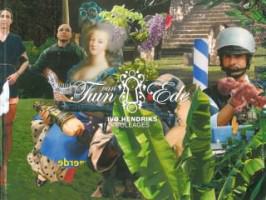 A part of the zap and thumb-through generation, he reveals himself as a child of his times. By pasting fragments together to make a new whole, Hendriks captures the 21st century in pictures as no one else can.

Thanks to the unceasing supply of images in the media, soldiers, victims, revolutions and disasters are intruding ever more deeply into our private space. Often the reality that is being dished up to us in this process is selective, fragmentary and manipulated. Hendriks tears this reality into pieces, makes a new selection, and blends the fragments he has chosen into a colorful, provocative collage.

The result offers a picturesque scene. Run-of-the-mill stimuli are 'remixed' into lyric, sometimes confrontational images. Kitsch and beauty go hand in hand. Using techniques and compositional schemes from traditional art meticulously, Hendriks creates an apparent balance - something that the absurdity of the images in Garden of Ede only reinforces.

The exhibition Garden of Ede is accompanied by a book bearing the same title, with an introduction by Kees van Twist and a explanatory text by the writer and visual artist Eric Bos.

Opening and book launch Friday, 9 May, 5:00 p.m., with Kees van Twist, Embassy Council on Art and Cultural Affairs. Ivo Hendriks will be present.

Also on show in this period:

Marvin Vince Kerstholt- Nothing is real