In connection with the events in Israel and Palestine, Noorderlicht organised an international project in 2002 titled Confronting Views. Nine photographers drew a picture, in diverse series, about the ongoing conflict. Each in their own way shows the present situation and background, the pattern of action and reaction and the weight of history, belief and violence.

Confronting Views does not take position, but shows a photographic approach of how to deal with the conflict, ranging from hard news photography to a more figurative interpretation. Because of that, the exhibition is not only an impression of the Israeli-Palestinian confrontation, but also a confrontation of photographic visions.

Curator: Wim Melis
With introductions by Judith Belinfante and Koen Schuiling, Chairman of the Noorderlicht Board 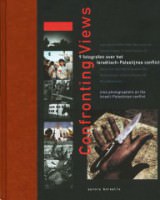