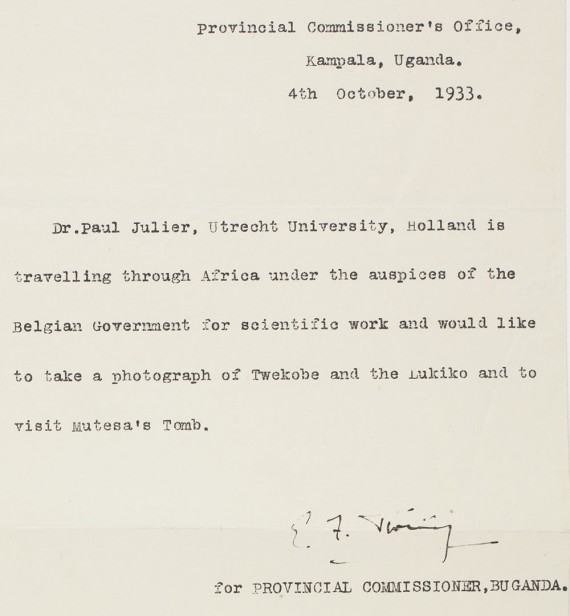 On commission for 'The Sequel' in Africa, Andrea Stultiens reports about her process while working in the footsteps of Paul Julien. This is part 2 of her report.

Much has changed in Buganda

Since 2007 I am in Uganda several times a year. For ‘The Sequel’ I will try to take some distance from my African homeland and look at it as a time traveler through the eyes and written accounts of Paul Julien.

The land that we now know as Uganda was approached by the British through the kingdom Buganda, that had an organisational structure that was in place, and at least initially welcomed what the white visitors had to offer. After a stay in a forest in the Congo, Julien entered Uganda in 1932.

‘The traveler who enters Uganda from Congo has trouble believing his eyes when seeing what in such a short time span has been achieved in this country. On Lake Albert [...] operates an excellent shipping service on a luxurious steamer [...]. Neat cabins and salons are available to the traveler. Indian stewards dressed in stainless white and a whole bunch of black, mostly Bagandan servants are the staff, creating an experience close to that on a mailsteamer between Bombay and Mombasa.’

Paul Julien probably reached his widest audience in his talks on national radio. In thematic subsequent talks he shared his African experiences. On January 20th in 1935, in a sequence about the river Nile, he spoke about Uganda/Buganda.

‘Just like the rest of Uganda, Buganda is part of the British Protectorate, but has to a large extent self gouvernance. The king is called the Kabaka and has his palace on the Mengo hill, close to Kampala, one of the seven hills on which the commercial capital of Uganda was built. Thanks to a special permission of the British authorities I was able to visit the Kabaka’s palace, where the eternal drum is beaten day and night and could make the acquaintance of some of his high government officials, of course all black, and visit the extensive complex of government buildings, where the Lukiko, as the Buganda parliament is called, gathers [...].’

The Kabaka and the federal government were not always close friends. Mutesa II was exiled in the 1950s by the British governor. He resided in the UK for a while, where he had also studied before. Meanwhile back in Uganda a new Lukiko was built according to directions given by the exiled Kabaka, who took inspiration from the British parliament. 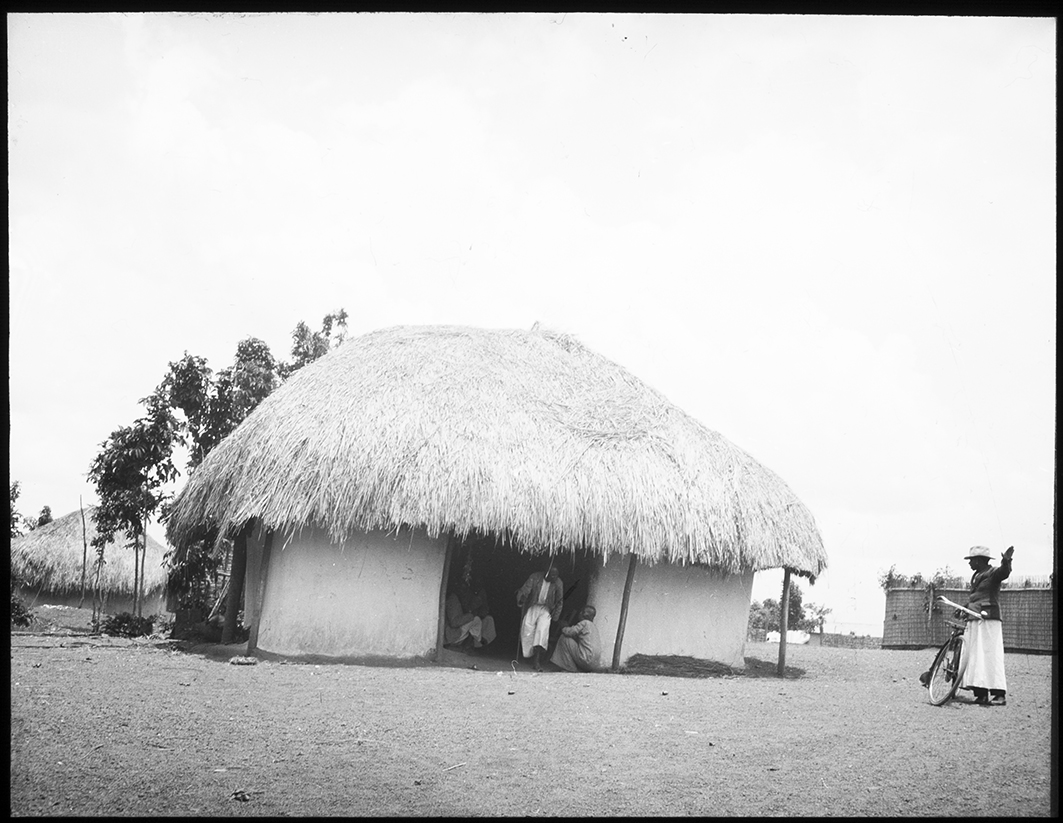 Possibly the Lukiko, 1932. From the collection of lantern slides by Paul Julien, Nederlands Fotomuseum 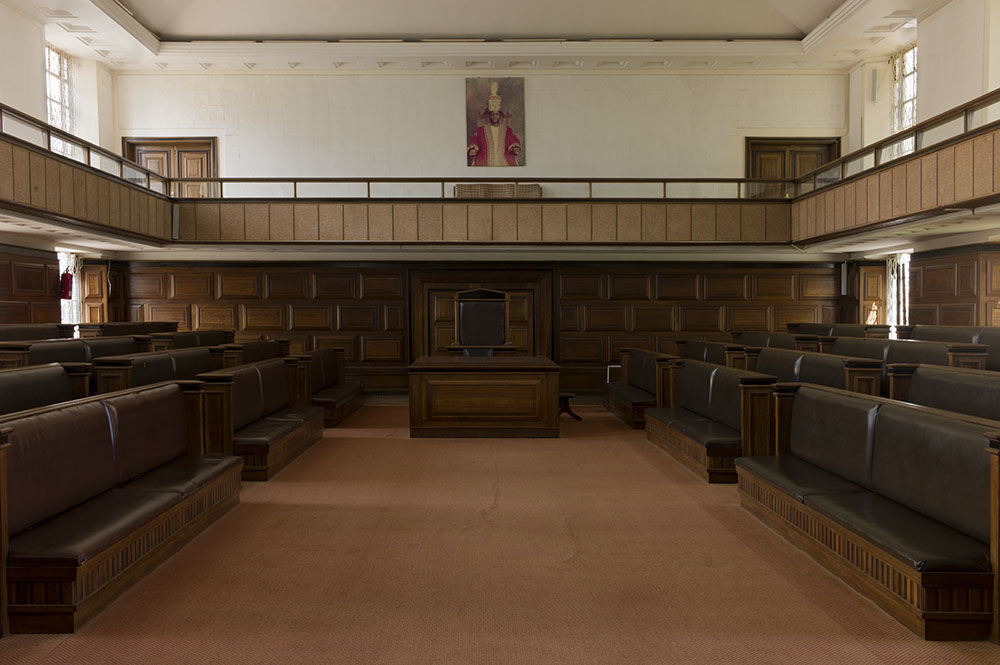 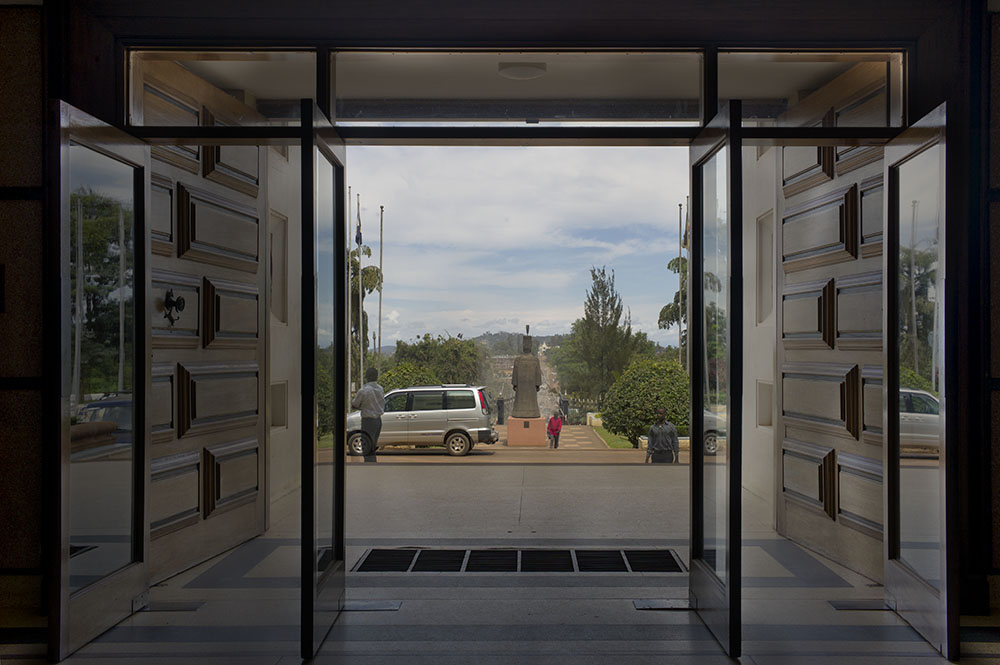 © Andrea Stultiens: View on ‘The Royal Mile’, that connects the parliament with the palace, 2013

Julien admired the progress made and attributes it, next to the missionaries and British influence, to the high level of civilisation of the Baganda. But he was not only positive about it.

‘When in the afternoon the offices and government bureaus close, masses of blacks in a European style move over smooth tarmagged roads on their bicycles, on motorcylces and in cars towards their homes that show European influences as well. When at night you hear the grammophones and see the black youth play tennis and golf. When you visit one of Kampala’s cinemas where the natives watch American movies every night, then you get the impression that all that is indigenous African has disappeared, was forced out and has made way for a Western imitation culture.’

Several years after Julien’s visit the British helped to renovate Mutesa’s tomb. Concrete pilars and a metal beam were installed to support the construction. The remains of the Kabakas that followed Mutesa were also burried here and the name changed into Kasubi Tombs. In 2010 the building caught fire. Negotiation about the state in which to rebuild it are ongoing. As a visitor I got a tour around the ground, where the place of the Tomb was covered with an orange plastic cover, saw the huts where the women taking care of the deceased Kabaka’s live and heard that Unesco is not happy with the windows that were placed in them, because they are supposedly not authentic. 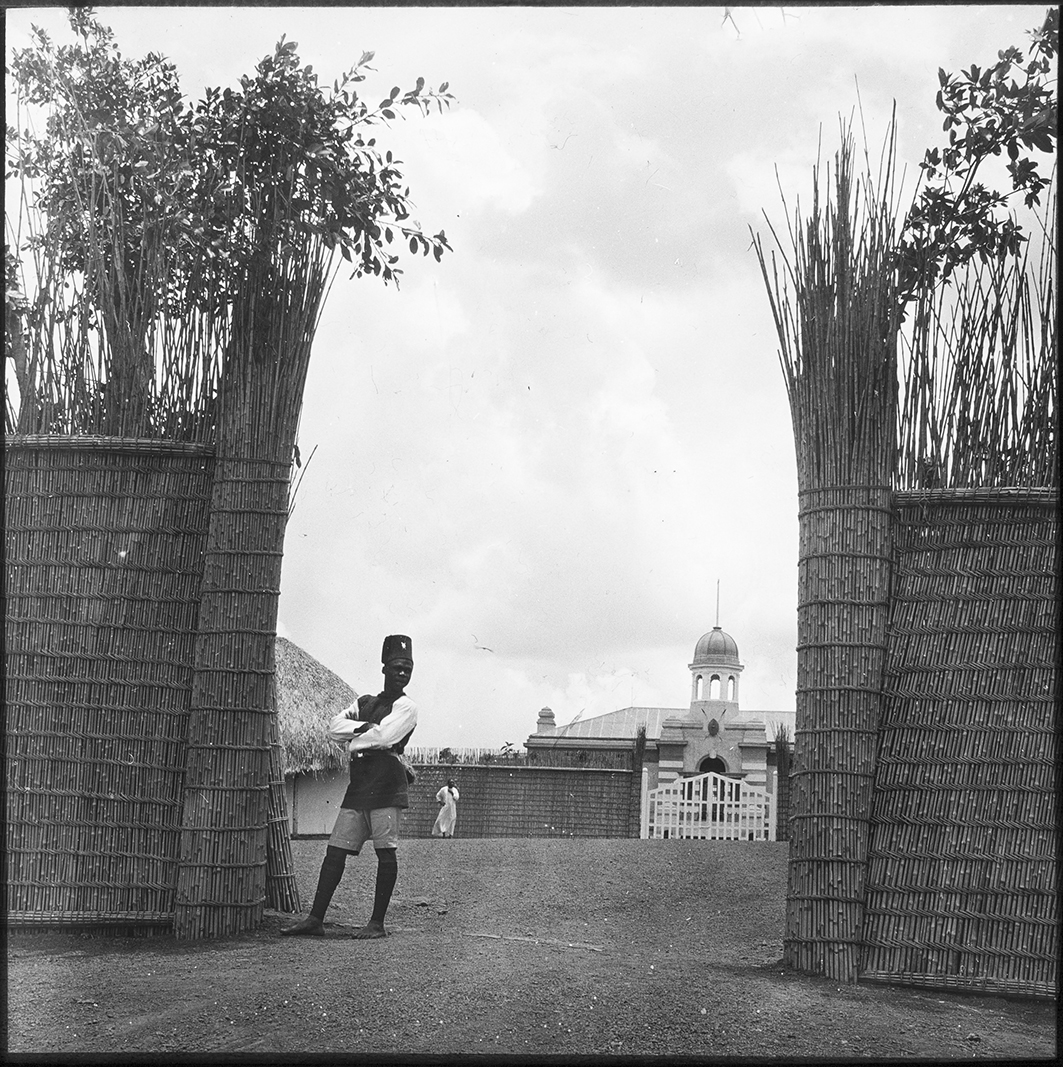 Twekobe, 1933. From the collection of lantern slides by Paul Julien, Nederlands Fotomuseum 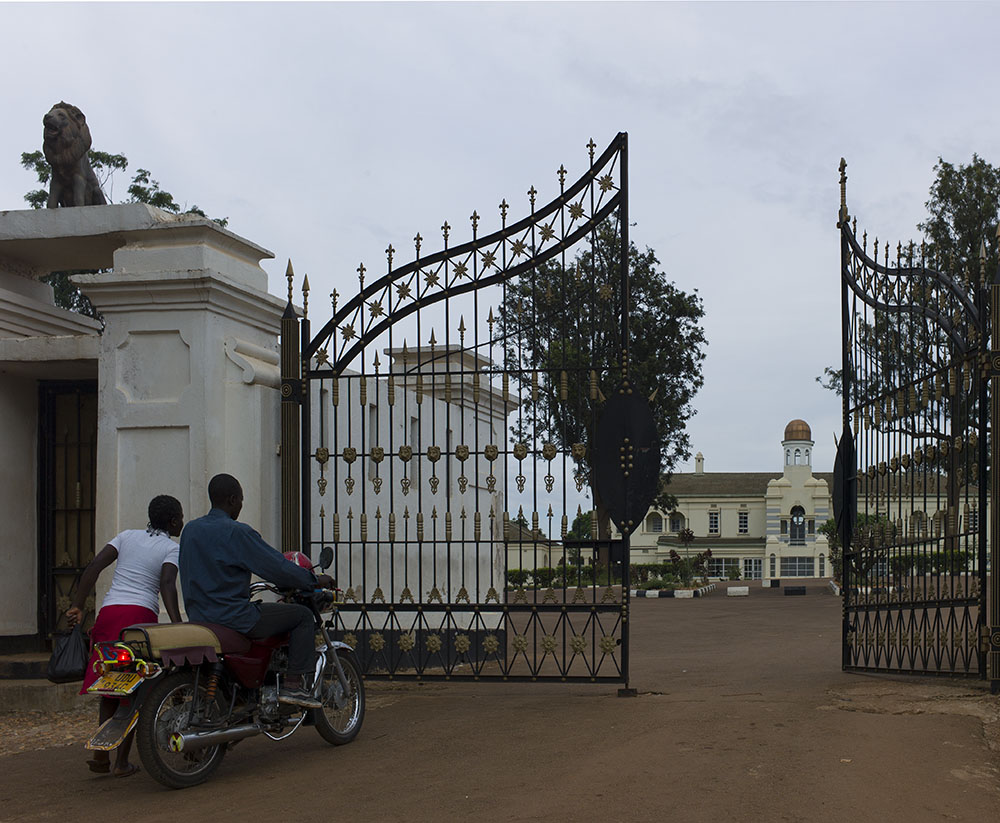 © Andrea Stultiens:Twekobe, a rebuilt version of the palace that was attacked and burned down by soldiers on order of Obote, now only in use for official moments and meetings, 2013 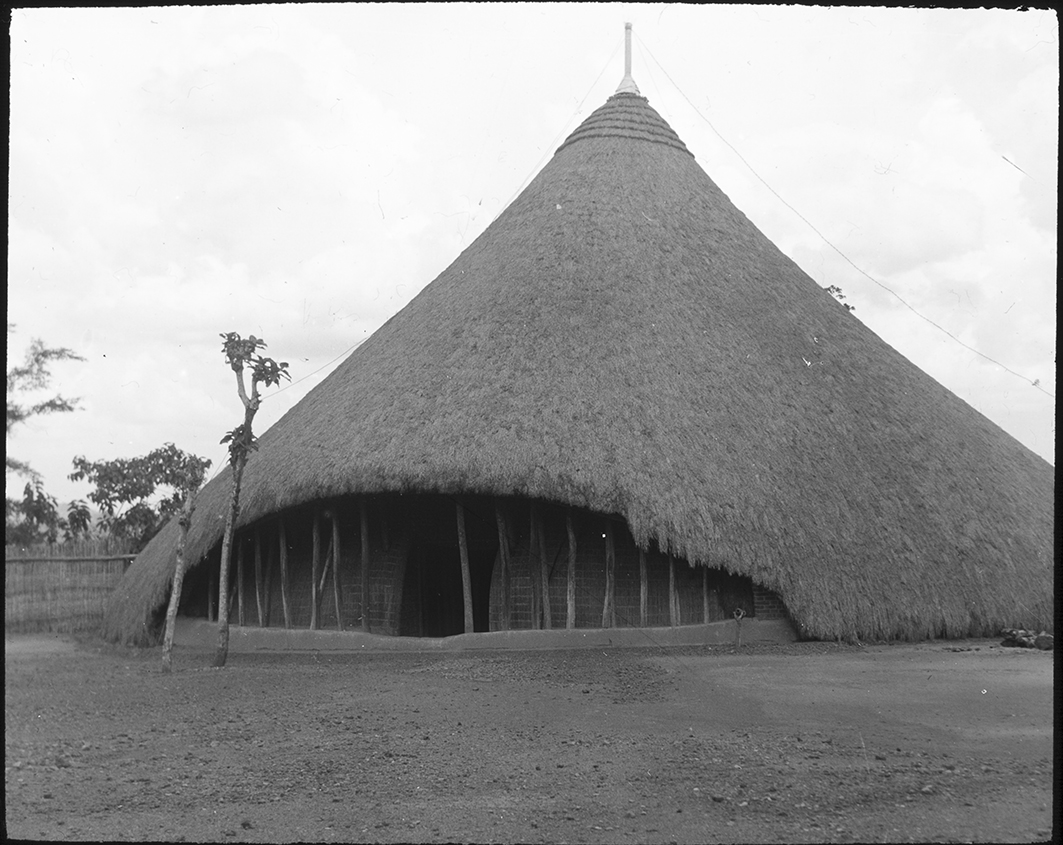 Mutesa’s Tombe. From the collection of lanternslides by Paul Julien, Nederlands Fotomuseum 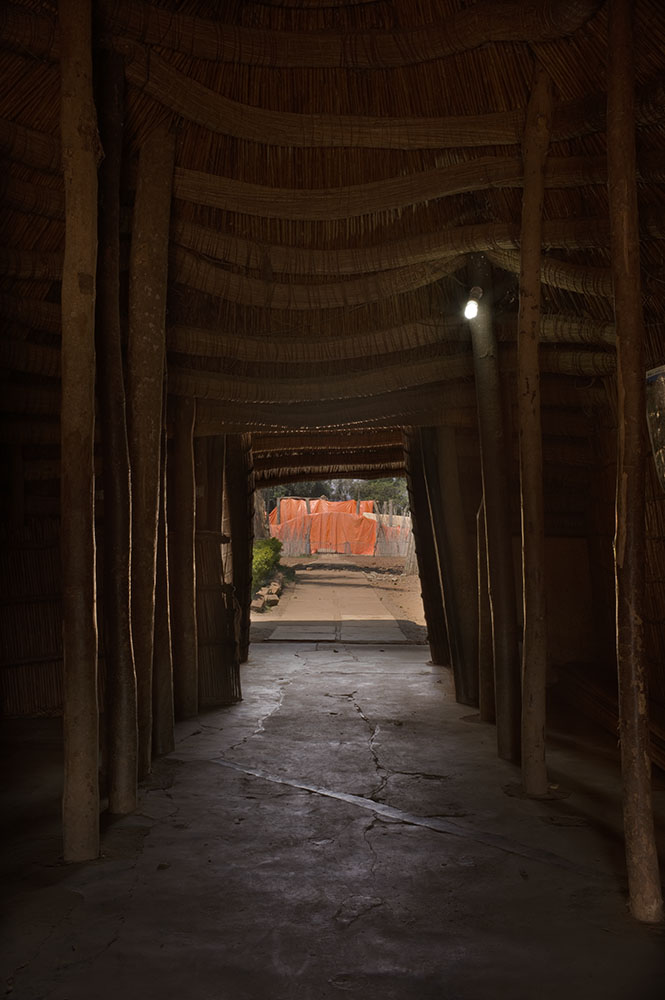 © Andrea Stultiens: Restored entry to Kasubi tombs with in the distance the place where the tomb used to be, 2011