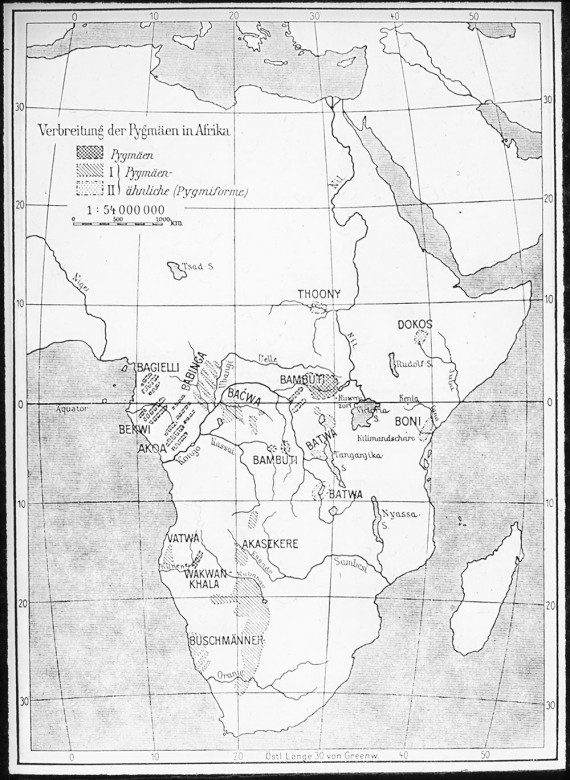 On commission for 'The Sequel' in Africa, Andrea Stultiens reports about her process while working in the footsteps of Paul Julien. This is part 3 of her report.

Much has changed for the Batwa

The end of 2012 I celebrated with friends and strangers on an island in the middle of Lake Bunyonyi in southwestern Uganda. Among the strangers were some Batwa, people that were once categorised as Pygmies and share their environment with the more populous Bakiga. The Batwa kept to themselves, except during the drumming and dancing. On New Year’s Day, 7 AM, a meeting was held. The collaboration between my friends that run an organisation called Edirisa and the Batwa was discussed. At the end of the meeting I enquired whether it would be o.k. for me to come back with photographs made of Batwa decades earlier. It was. In April I returned. 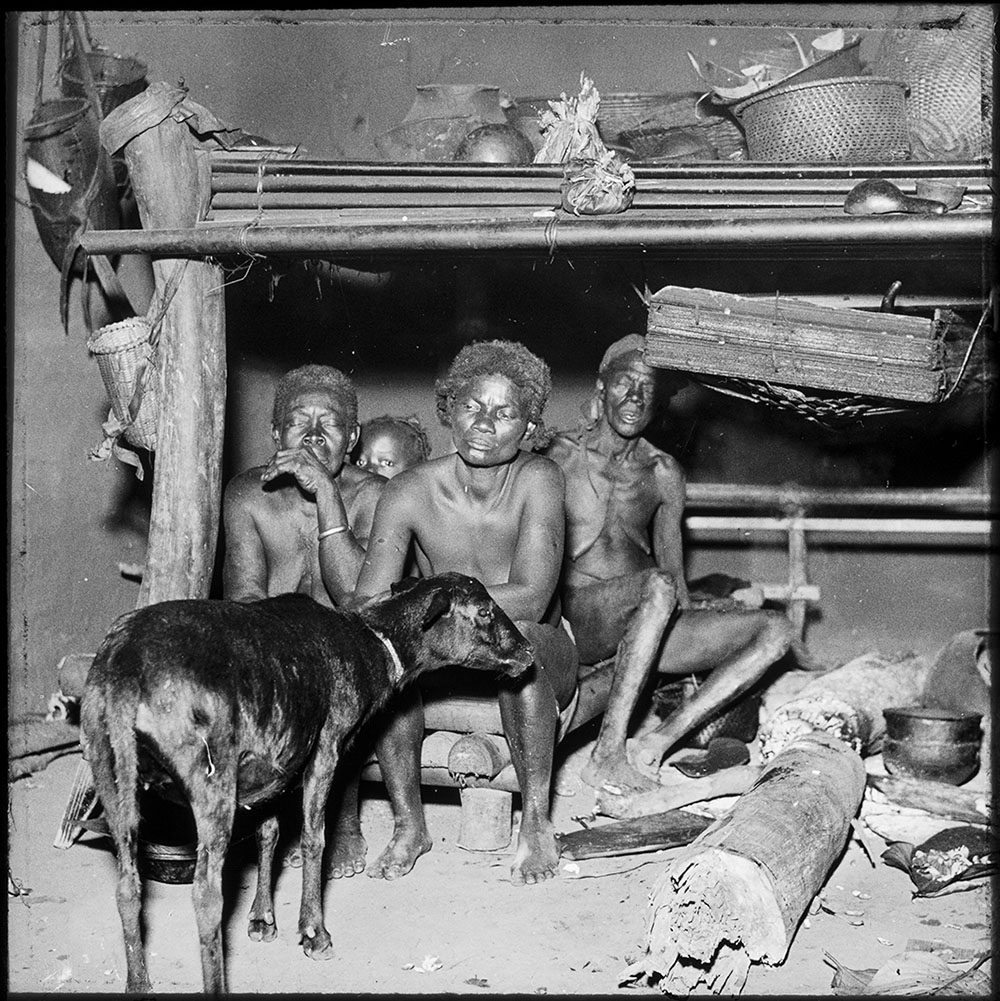 The Batwa used to live in the forests of western Uganda, eastern Congo and parts of Rwanda. They still live there, but in Uganda they were forced out of their forests in 1991 to create space for the endangered mountain gorillas. No longer able to hunt and sell what the forest had to offer they had to find new ways to sustain life. I heard that they were not compensated in any way. 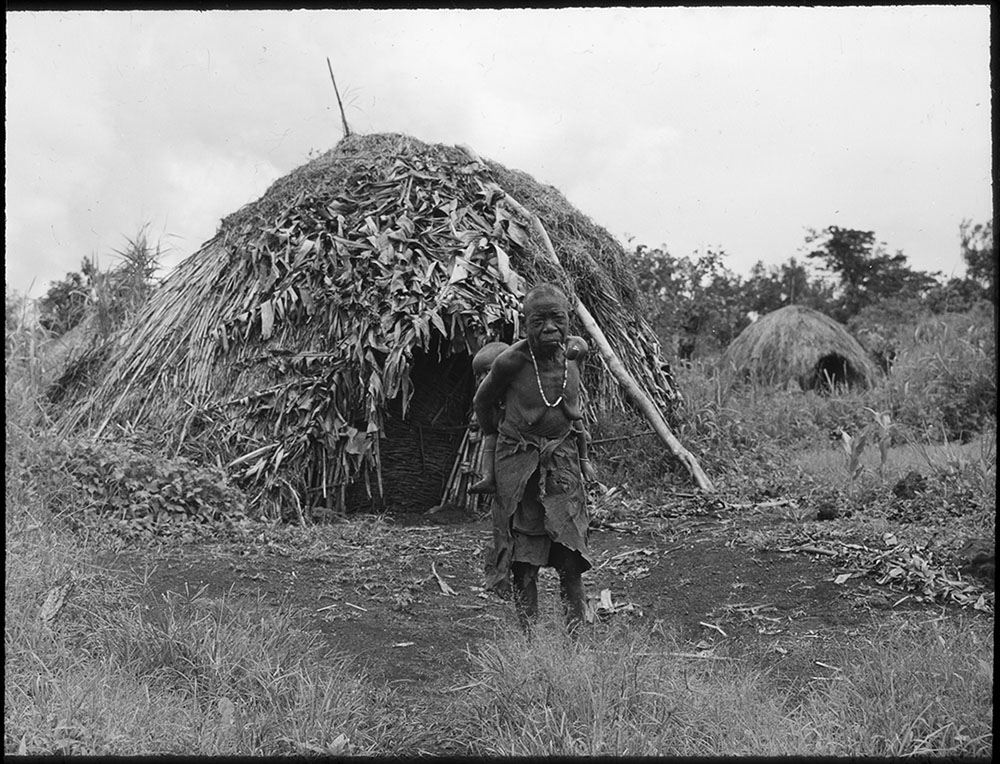 Paul Julien was convinced that a research among the different pygmy communities of central Africa could create knowledge about the origin and spread of the prehistoric human being. With this in mind he visited, next to the Batwa, also members of the Bambuti, Bacwa and Babinga. In 1957 Julien received a letter:

‘The author of the book “The Congo” talks about the Bambuti of the Ituri Forest and is of the oppinion that they, and in general all Pygmies, are sly, suspicious and in certain circumstances even vicious. On page 203 of your book “Pygmies” you give some impressions that, however personal and incidental, give a much more favourable impression and judgement. I would highly appreciate it if you could let me know whether concerning this issue we should take a middle ground.’

I didn’t find Julien’s full answer among the documents in the Nederlands Fotomuseum, but on the letter itself he wrote: ‘answered: insisting fully on my favourable judgement’.

In Buhoma a doctor in a local hospital bought a piece of land that borders Bwindi Impenetrable National Park, and created a foundation around it. Here I visit ‘the Batwa experience’. I was told that the experience was created to preserve for a young generation of Batwa traditions that would otherwise get lost now that forest life does no longer exist. But it is also an enterprise that generates income for the foundation and the Batwa community connected to it. I take the experience with an aunt, a mother and their cousin/daughter who has been volunteering on the other side of the country since a couple of months. We climb up a hill with our guide and are stopped by rangers who are watching gorillas with another group of tourists. The animals do not stick to the borders of the National Park and can sometimes be found here. When we are allowed to pass them we are introduced to herbs, see how fire can be made, honey harvested and what Batwa houses looked like. We take part in something like a hunt and attempt to handle bow and arrow. The Batwa dance for us and we listen to a story. 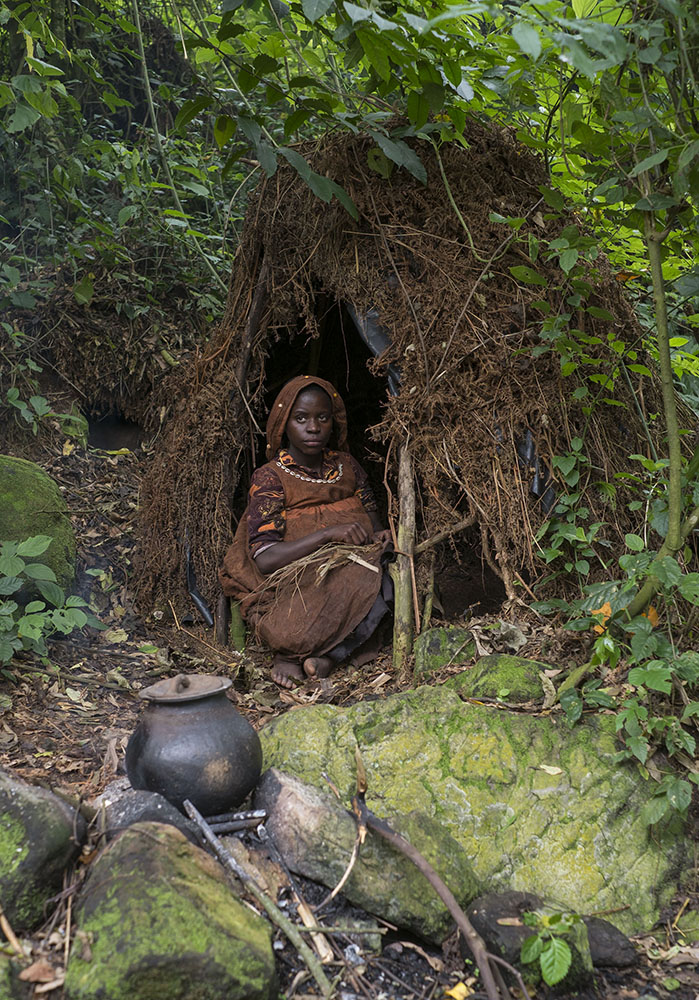 In Ruwahamano, as the crow flies only dozens of miles away, another foundation tries to help the Batwa community. They built a school and a house for the two Mukiga teachers they employed. When I visit the village one of the teachers is showing some of the men how to construct beehives. 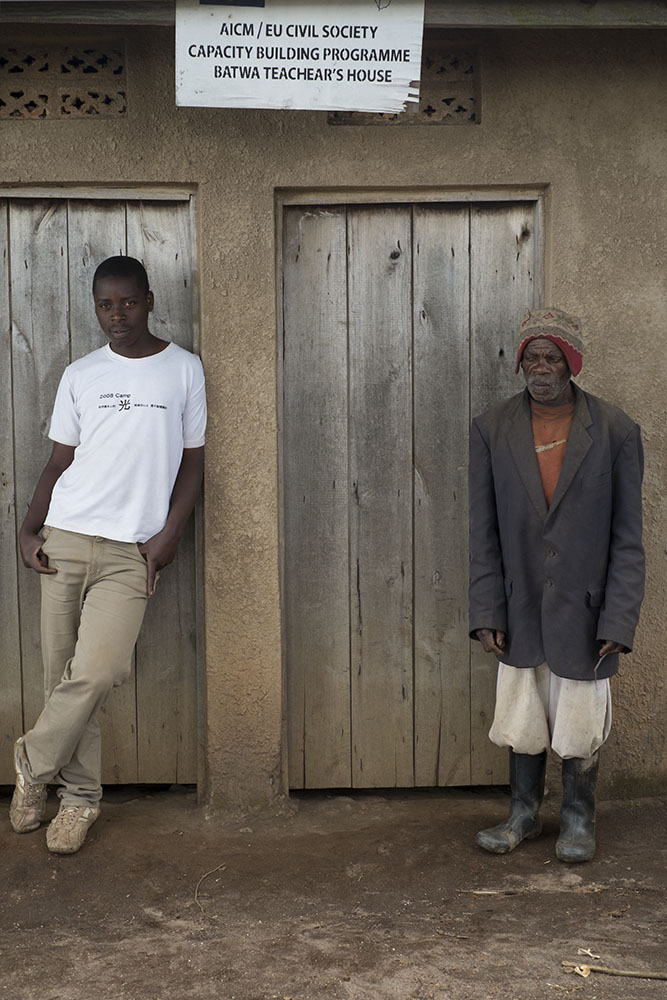 I hand out prints of the photographs Julien made among Batwa communities on the other side of the Congolese-Ugandan border. They meet with great interest. There is surprise about all the nudity in the photographs. People wonder whether it was really “that bad” or staged for the photo. At the same time some express the wish to return to the forest. Muyacante William Jackson, one of the old men, looks at photos of his peers. He recognises two of them. They didn’t live here, he says. They came to visit when he was a boy and lived on the other side of the vulcano. Another old man confirms his story. I am pleasantly surprised. Sooner than expected some of Julien’s images are directly linked to the reality they were made in 65 years (in this case) before. 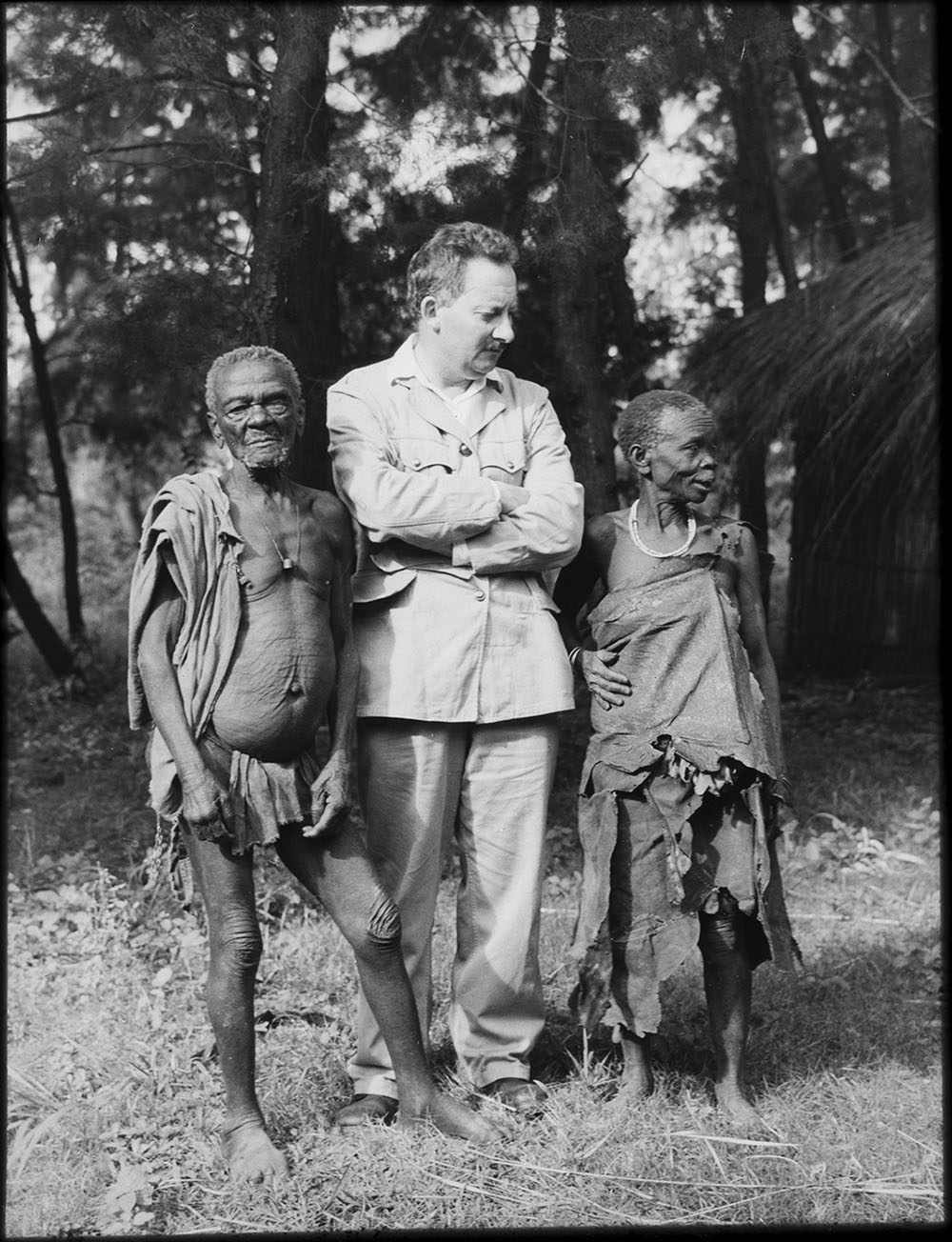 Paul Julien with to his left Mungada who was recognised by Munyacante William Jackson. Photo probably made in 1947. (Lantern slide from the collection of the Nederlands Fotomuseum) 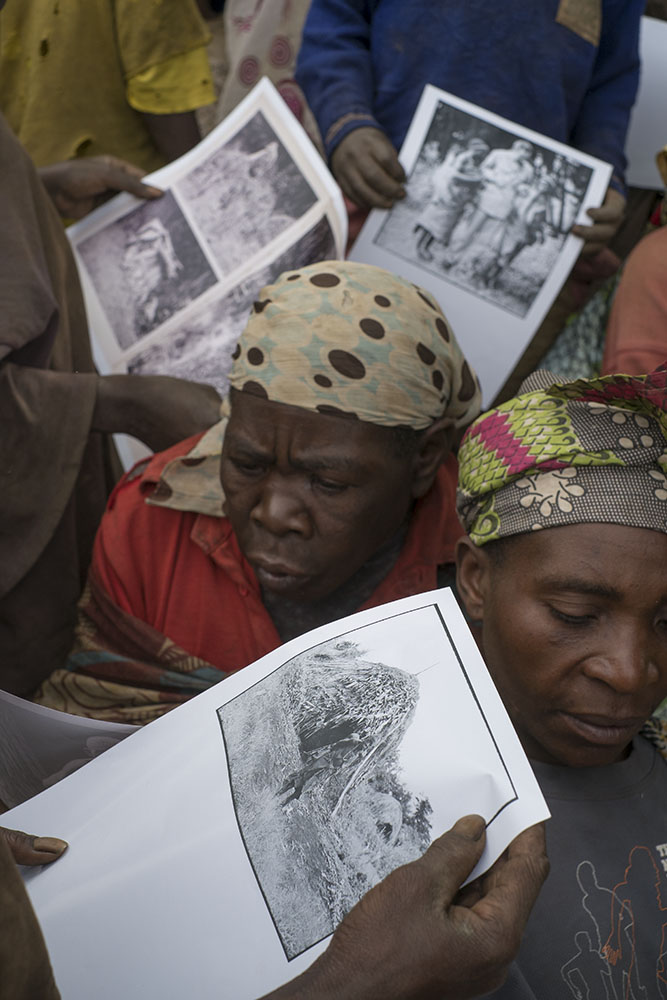