Let’s start this post with some news: it was just announced that Joan Fontcuberta will be the curator of the 2015 edition of the Mois de la Photo: that’s something to look forward to, I think.

Today was another day of exhibition visits, we saw some 7 shows mostly in artist run centers and cultural centers around the city, and one in the Museum of Fine Arts. I won’t describe all the shows we saw, but will try and clarify my own conclusion after having now seen all the exhibitions curated by Paul Wombell for this event.

Yesterday I was a bit confused, as I tried to wrap my head around the theory and the selected works that we saw. I think that somehow I have now understood where the curator wants to take us. The title of this year’s Month is ‘Drone, the automated image’. This title kind of suggests that the focus is on the machine creating the image, and how the human factor is becoming smaller as technology advances. In the essay in the (by the way very good) catalogue, and during the introductions that Paul gave us at all the venues, this point came back several times. Today for example he introduced a show by Elina Brotherus of self portraits by stating that the camera actively plays a role in the creation of each image: the camera as having a mind of its own. 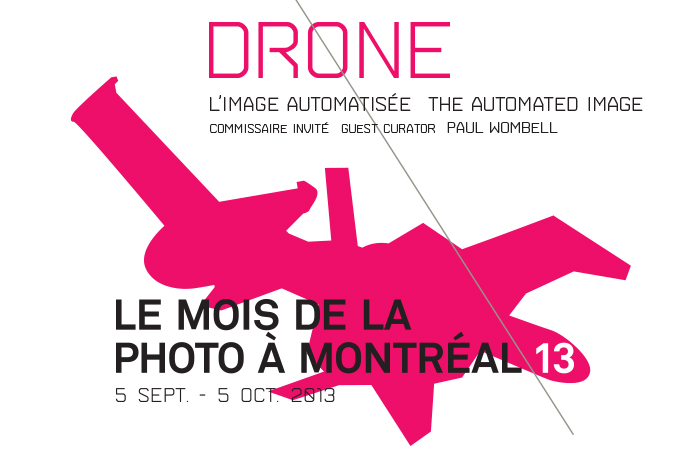 But I felt that the exhibitions made much more sense to me, if I approached them from another theme: perhaps these works point more to the idea on how technology has shaped our view of the world. Different and new technologies are allowing artists to employ new ways of seeing the world. And this expanded view of our world, and view on ourselves as humans is what we are confronted with in this collection of exhibitions.

I am not entirely convinced that ‘the camera’ and the advancement of technology is taking over the role of the human in creating the photograph. The exhibitions did not convince me of that point, and to be honest, neither did the texts and introductions. But, Paul Wombell does address a very important issue, and that is how the process of photography has fundamentally changed with the advent of new technologies. These developments have been going on for decades allready, but have sped up to mind boggling speeds in the past 15 years or so. We do need to pay more and more attention to the process of creation, and the role of perhaps not so much the camera, but of technology in a more general sense, when considering photography. To just take lots of pictures in the hope that among the 400 exposures on the memory card there’ll be a few good ones, does not seem to me a viable artistic (or commercial) practice. Both practitioners as well as curators, editors, and critics should pay close attention as to how the image or series of images came about. I don’t think we should put less stress on the image (as Paul seems to suggest) but we should give more attention as to how the artist came to create that particular image, and to what extent the image came about from conscious decision making by the artist, and to what extent it was the camera that had the control.