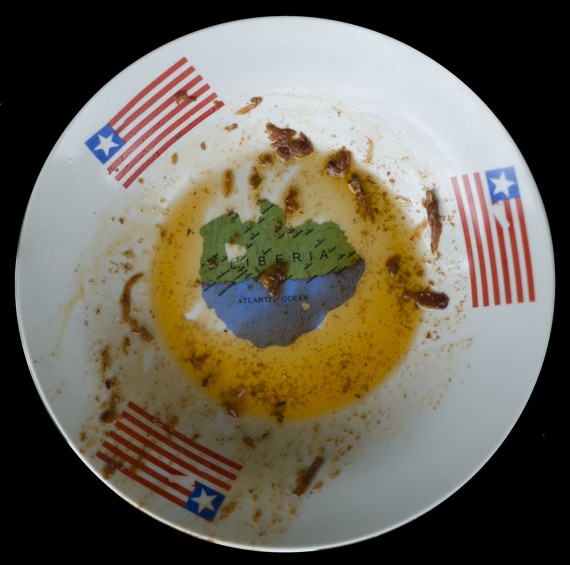 Plate after eating a Liberian meal

On commission for 'The Sequel' in Africa, Andrea Stultiens reported about her process while working in the footsteps of Paul Julien. This is 4rth and final part.

Much has changed in Liberia

In 1932 Paul Julien started his serological research in sub Saharan Africa in Liberia. I only heard about the country through reports about the civil war in Dutch newsbroadcasting between 1991 and 2006. This changed when Julien made me read about walking through rain forests, the atrocities and usefulness of secret societies, the Mandingos that dominated the trade in northern Liberia and the Kru and Vai scripts. In the letters he wrote to his parents it sounds like this trip was the most normal thing in the world to him. 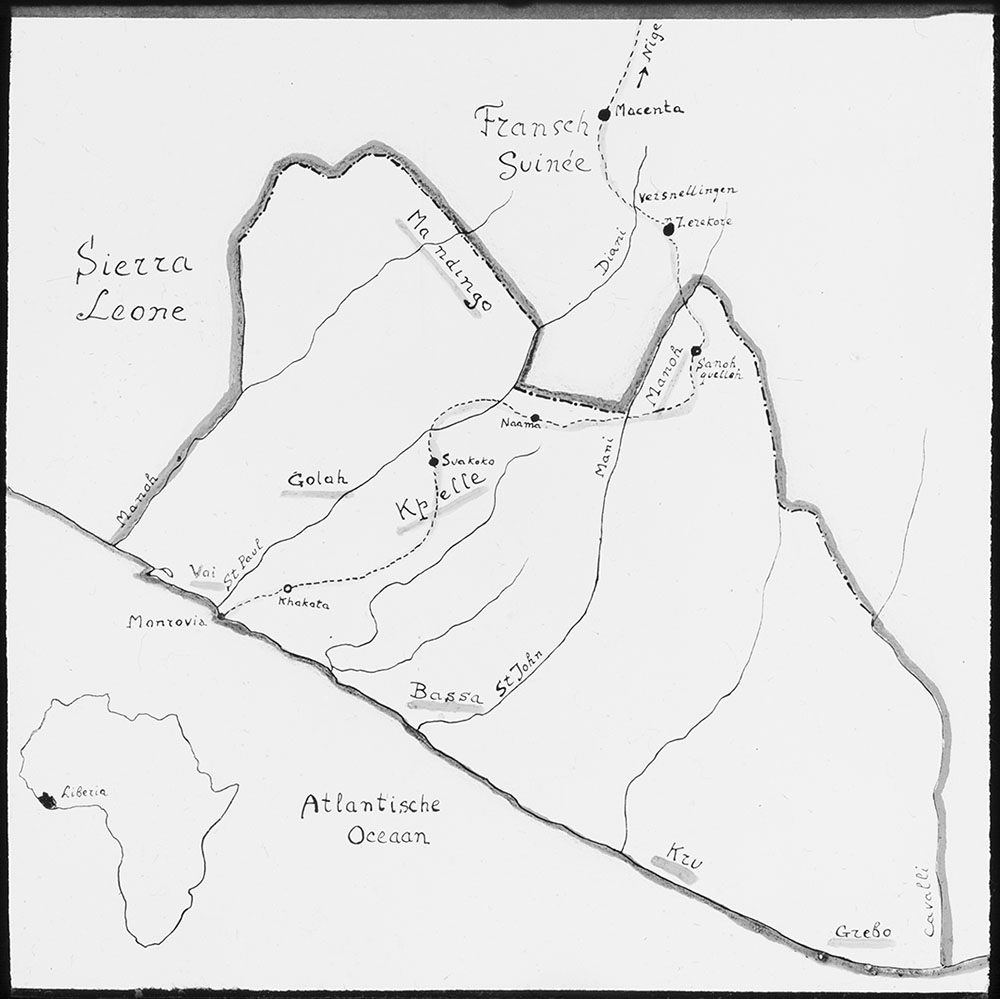 ‘When the rain stopped for a moment, I went to the Catholic mission […]. The warmest reception by three Irish religious men resulted in the instant offer to stay with them […]. They gave me all sorts of information about my planned trip. They were of the opinion I should go to Sanniquelli, which I already figured myself. This is a 500km walk. […] One missionary is living there. Except for this man there has never, or as good as never been any European that reached the place. I asked if there were risks involved, and they all were laughing. No danger at all. Walking the streets in London, that is dangerous, they say. They will arrange trustworthy porters. (Easy-going chaps these negroes, big children).’(Letter written in Monrovia, July 30th , 1932 by Paul Julien. The letter is part of the collection of the Nederlands Fotomuseum in Rotterdam, translation by Andrea Stultiens.)

We can only guess whether he really felt this comfortable with his adventures, or made it sound that way to comfort his parent. 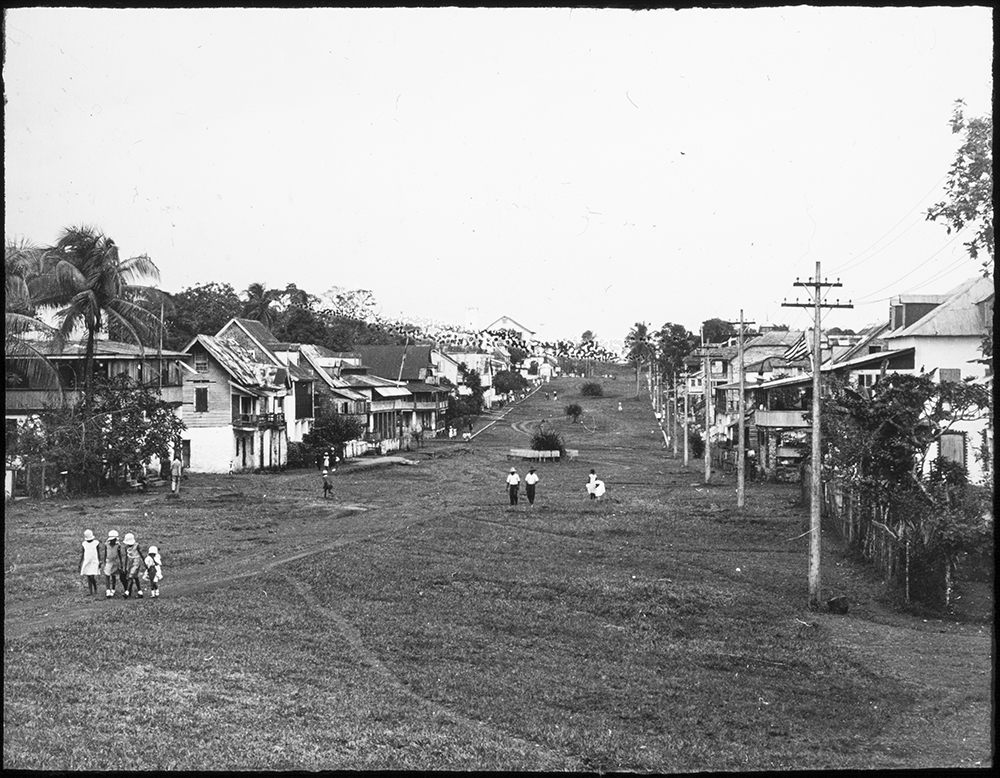 ‘The first impression [of Monrovia] is beyond description, I have never and nowhere seen such an incredible mess in one place. Streets full of people in all shades of black, dressed in rags were making their way through the mud. A little bit further on the “city” is a bit tidier, more pictorial than any other place. Everything is incredibly run down. There used to be electrical light: no longer possible since the government doesn’t have any money. All streets are overgrown with grass. An unbelievable number of ‘churches’ from a variety of American sects built in an untidy way. It’s very messy and at the same time of an unforgettable beauty. All this is located beautifully on a peninsula, with a lovely climate, 70 degrees only lots of rain. After I passed through customs, where I had to pay a small amount for the trunk with canned food, I went to the Dutch people who there are two of in Monrovia.’ 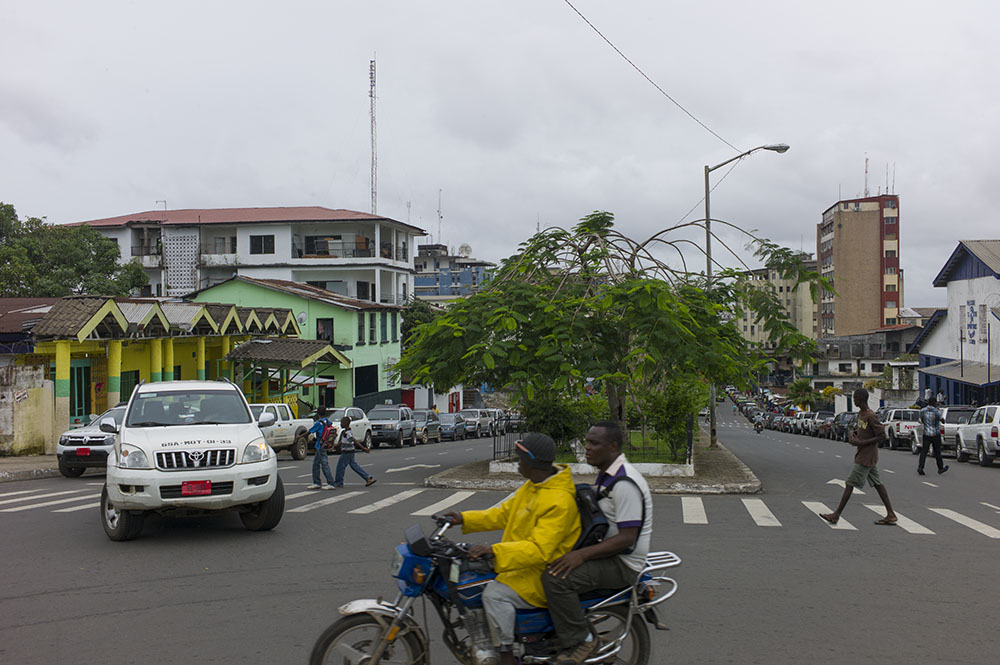 Kwei Dokie was a soldier in the Guinean army. He did not want to fight for a colonial power in the First World War so he took his family over the border into Liberia where they settled in Sanniquellie. He liked that Liberia was not a colony. Descendants of the American migrants, who started the ‘Negro Republic’ during the first half of the 19th century, still exclusively formed the central government in Liberia. They had limited influence in their country’s hinterland and were struggling to find local chiefs to collaborate with. By working with migrant Kwei Dokie and giving him the status of a King they found a way to do that. 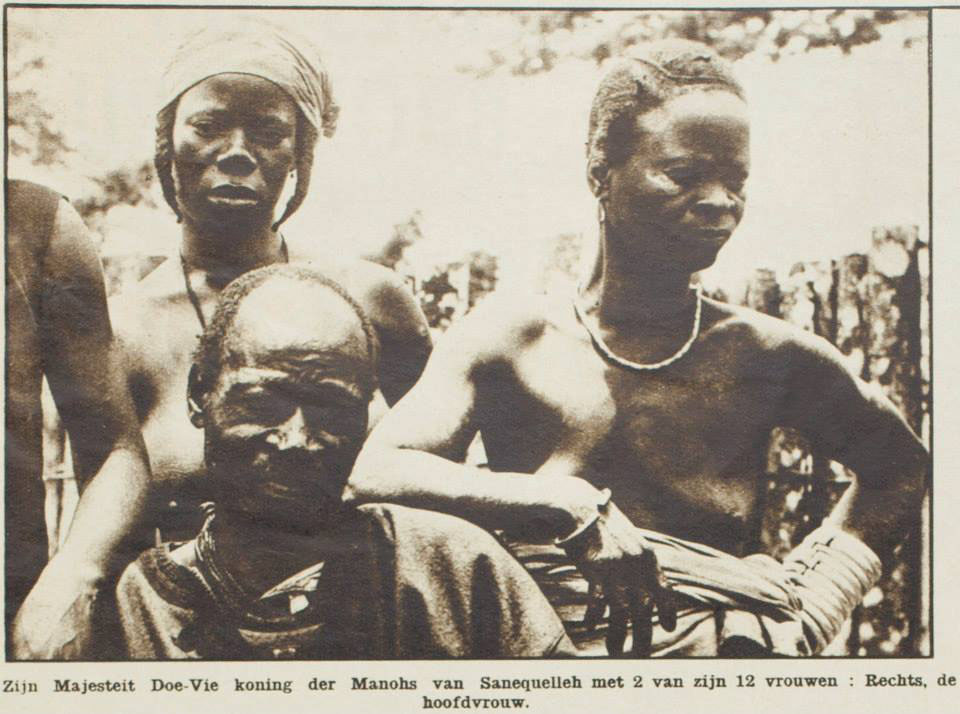 Kwei’s grandson James Moore Dokie has the task to share the family history with the large number of descendants. He knows many stories, and was of course part of what followed. He and many other family members lived for years as refugees in Guinea the civil war.

James never saw his grandfather. He thinks that Julien’s photographs, published in Belgian magazine ‘Ons Land’ [Our Country] in 1933 will make his task a lot easier. 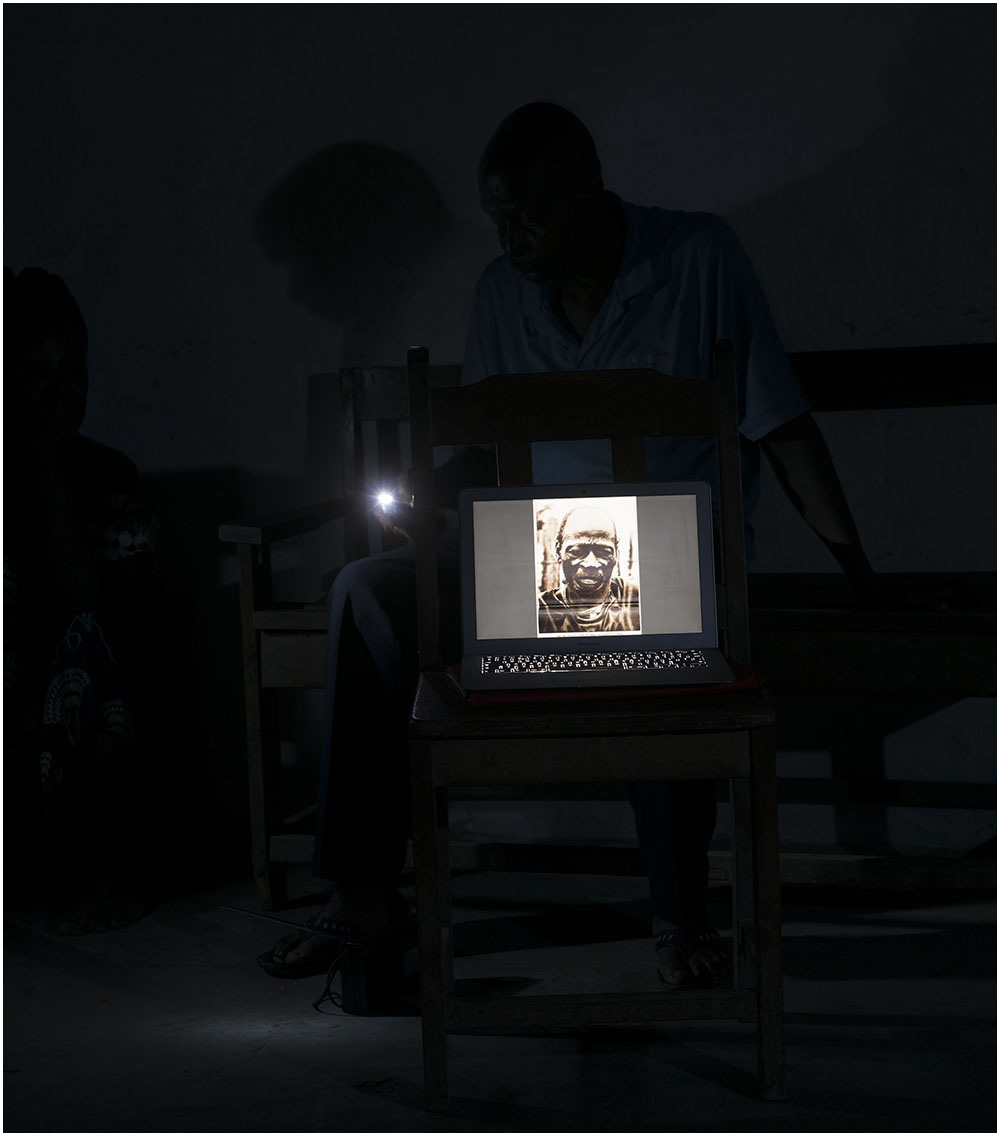 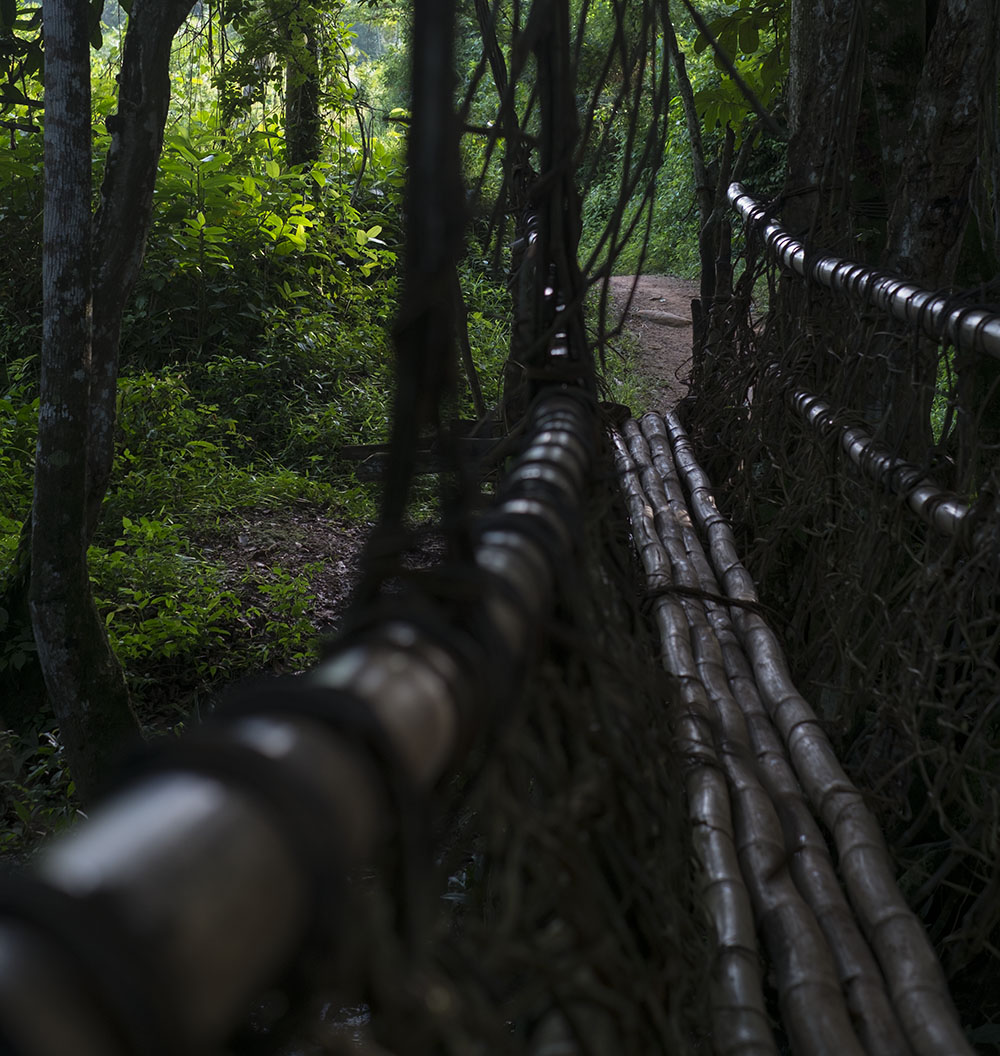 Monkeybridge that leads to the border between Liberia and Guinea over the St. Paul river, June 2013 (© Andrea Stultiens)

The border that Julien used in 1932 to go from Liberia to Guinea hardly changed. After an hours drive from Saniquellie we reach a checkpoint. I show Julien’s photographs of a monkey bridge and a raft crossing a river to the guards. One of them recognises the bridge and knows that it leads to raft that crosses the St. Paul River. One of its shores is Liberia, the other one Guinea. Another guard volunteers to show me, a friend and Alvin our driver and extremely valuable fixer, where to go. When we finally arrive at the monkey bridge the sun is setting. I cross the bridge causing a hilarious moment for all the children watching me from the other shore. Stepping into safari ant territory causes me to perform a strange dance. The bridge seems to be held together by just a few lianas. When I return to the safe side I am told that the bridge is renewed every year. Reconstruction is planned two days after our visit. The bridge is the same, but 79 version different. 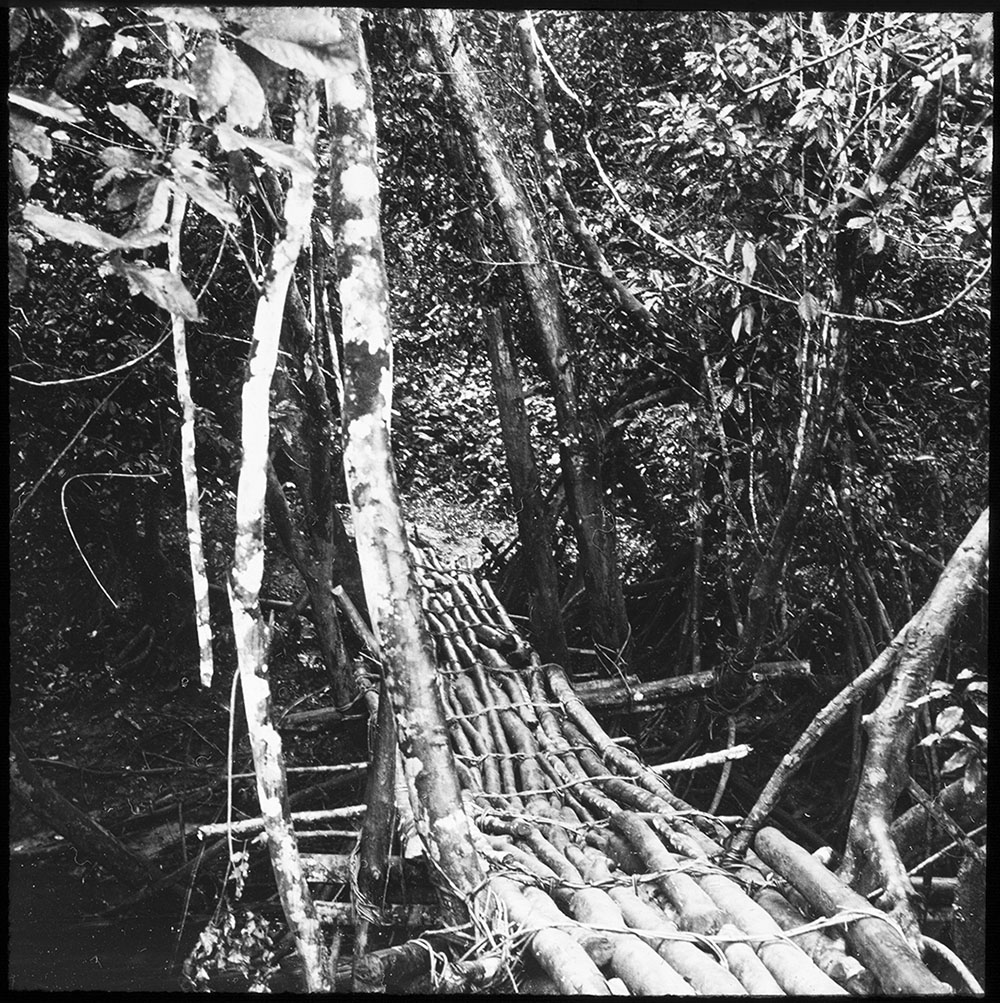 This post concludes the travel report by Andrea Stultiens about her journey through Africa for The Sequel, following the footsteps of Paul Julien.

Africa Web TV filmed Andrea Stultiens in Africa and in front of the presentation the project at the Noorderlicht Photofestival in Groningen. This short documentary shows us Stultiens process and dedication. Watch the short film 'Married to Africa' on YouTube (10:12 min) 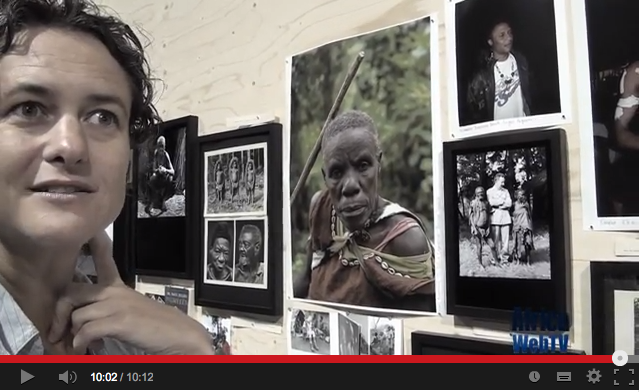 More about Andrea and her work can be found on her website and facebook-page.