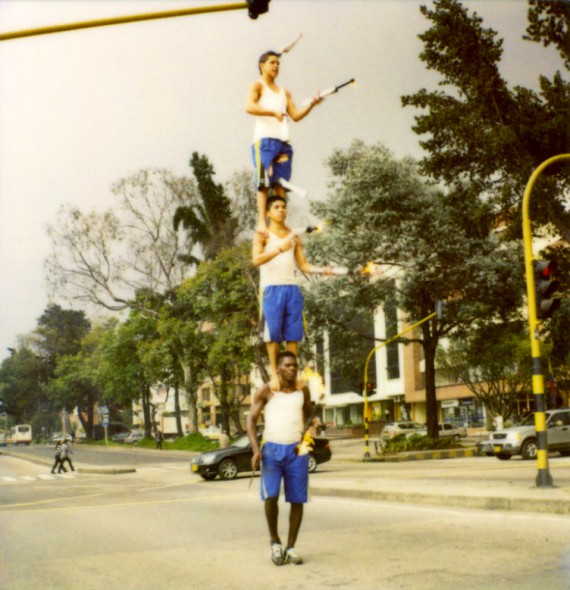 Matthew O'Brien joins our blogathon to talk about his long standing engagement with a complex country like Colombia.

Matthew O'Brien: I am very pleased that the curators of the Noorderlicht International Photo Festival chose my work, No Dar Papaya, to be part of An Ocean of Possibilities, because it seems to me the work doesn’t explicitly address those themes of structural failings of political and economic systems and the need for alternative futures, but rather speaks to those themes in a more subtle way.

I see the work as a personal exploration of Colombia, and as such reflects my experiences, perspectives, interests, and personality.  My work is always about beauty, in one way or another.  With No Dar Papaya, I guess you could say the work is about the beauty and diversity that I find in a country and society that is full of examples of political and economic systems that do not serve the people, and which have resulted in tremendous economic disparity between the haves and have-nots, fifty years of armed conflict, lots of poverty, insecurity and high crime rates, and lots of environmental destruction.  My work doesn’t specifically explore those issues, but it is the context in which I create the photographs of what I think is beautiful or interesting or somehow speaks to the distinctive national character/experience of Colombia.  Since I first came to Colombia in 2003, I have been really fascinated by the idea that in the midst of all the harsh realities of Colombia, there is so much beauty and joie de vivre.

I’m in Colombia now with a traveling exhibition of No Dar Papaya and for the launch of the book No Dar Papaya, and I have been getting overwhelmingly positive response to the work. I often hear from people that they are so pleased that the work is not about war, violence, the cocaine business, and misery (lots of foreign photographers who have worked in Colombia have focused on those issues, so much so that there is even a word for that kind of photography here, pornomiseria) which people here tend to feel paints Colombia and Colombians in an unfair and negative light.  I guess my work goes against the trend in photography here, and in its own strange way is subversive by not focusing on those issues.

Noorderlicht: Based on your experience working with different communities and individuals who are affected by this 'crisis of agency', what impression did you get about the likelihood that common people can regain such a sense of agency? Do you feel there are grounds for a realistic hope for improvements?

Matthew O'Brien: I think people can regain a sense of agency, but it is an uphill battle, and always will be.  I see it in Colombia as well as the United States.  In the United States, forces from the right, which means interests that put increasing their wealth and power above other concerns— health, education, justice, and opportunities for people as well as the health of the environment, for example— work very hard and in the last few decades have been very successful at doing so.  In the US there is legalized bribery in which wealthy people and corporations give “campaign contributions”— essentially buying the legislators (congress members and senators) as well as presidential candidates,  to get the laws they want passed, which generally make life worse for common people and take away their rights, and in one way or another benefit corporations.  The judiciary has been corrupted too, so you get the Supreme Court making these absurd rulings about corporations having the rights of people and money being the equivalent of speech, thus allowing corporations and the wealthy to give limitless amounts to politicians who prostitute themselves to the highest bidders, rather than serve the people.  So, for the people, it is an uphill battle, but there are Americans who really value and cherish their rights (I’m one of them)  and fight hard to keep them, and so there is room for optimism.  Much depends on information, and the internet and the way it has transformed media and the way in which people can get and share information has been very important in that respect.  Of course powerful interests are seeking to put restrictions on the internet and abolish net neutrality, giving preferential access to those organizations who can pay big money.  Like I said, it is an uphill battle for common people to gain and even maintain agency.

I don’t have as strong of a grasp on how the political system works in Colombia, but here, like everywhere, people with wealth and power work really hard to maintain their place of privilege, and, in this very classist society, there is a sense of entitlement among the wealthy that they actually deserve their privileged place.  I think you can trace that mentality to the Spanish colonial system, so it is really quite embedded in the culture.  One huge difference between the United States and Colombia in this respect, however, is that in Colombia, the privileged class goes to greater extremes to maintain their privilege, and violence is used much more often against political and economic opposition.  Journalists and labor organizers get killed here, political candidates too.  I have a friend who was working on a documentary about the taking of the Palace of Justice— an important event in 1985 which resulted in lots of people getting killed, and information has been suppressed about who was responsible-- and she was told she better stop work on that project and leave the country or she would be killed.  But, it seems to me that there is a lot of political awareness among the people here, and the internet and the flow of information it fosters have contributed to that, and there is reason for optimism in Colombia too.  But it is an uphill battle, like it is everywhere.

Noorderlicht: What is the audience that you'd hope would look at your project / series? Who should see this work?

Matthew O'Brien: I like to think that my work is accessible to everybody.  I’m really interested in sharing it with the Colombian public, which is why I am in Colombia now.  It’s been very gratifying to share the work with people here and get such positive responses.  I think sometimes an outsider with a fresh perspective can help people to appreciate some of the beauty and richness that surrounds them which they might not always notice or appreciate, and that’s some of the feedback I’ve been getting.  But I am interested in sharing it with as big of an audience as possible in and outside of Colombia.  When you put so much time and effort into a project (the photos span 2003-2013) you sure hope that it will reach a lot of people. That’s one of the reasons I really wanted to create a  book of this work, so that more people can see it, and that is why the book is bilingual, in both English and Spanish.   I’m thrilled that work from the series is being exhibited in Holland now, and I’m very curious to know what sort of response there has been.