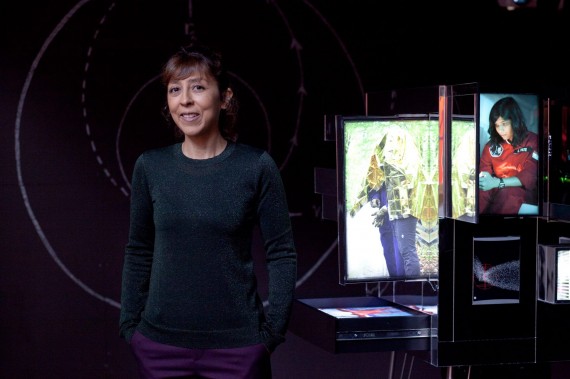 As I’m finishing up some work for the exhibition opening, Monica Alcazar-Duarte walks in. She seems very calm and keeps smiling in between my ‘two more minutes!’ and ‘almost done’s. When I wrap up the work and we walk to the Der Aa-Kerk, Monica casually starts a conversation. For a moment, it almost seems weird to socialize amidst the pre-opening stress. She tells me she’s very enthusiastic about Groningen and the festival and she asks about my work. I realize I’m so focussed on getting things done I almost lost sight of what this is all about: the photographers and their stories.

We quickly connect and dive straight into Monica’s work: a playful looking 3D object with mirrors, projections and light-box lit photographs. Monica is on fire and jumps right into her story: “Things are happening so quickly. Technology is changing so fast that within 5 years from now things will be possible that you can’t imagine. These extraordinary things are going to catch up with us.” Monica has been working on her project The New Colonists for the past three years now. This has resulted in an interactive installation which reflects on the adventurous side of space exploration, promoting solidarity through emphasizing the import of meticulous preparations for such travels.

“The object is very sci fi - like something that might go into space - and it is using the language of the extraordinary side of space exploration: very exotic and scientific. That is a trick because when you are attracted to it and you can be fascinated by it, but the inside is very mundane.”

She figures we need to catch up with science. Through her work Monica is trying to remind her audience of the less extraordinary side of science and, specifically, space travel. The mundane side of an exciting adventure can be easily forgotten, but the devil is in the details and if we don’t think things through properly, who knows what might happen? As an artist, Monica believes it is important to talk about the ‘boring’ sides of space exploration. Taking law as an example, she explains that, if we don’t have our policies figured out in time, things might get very messy. I paint myself a picture of the Wild West in outer space and realize she is right.

Monica continues: “It is not as glamorous as talking about rockets and space travel. But with this era of exploring space and colonization and expanding humanity to another planet to preserve humanity for the far future, we do need to add to the agenda that this research and knowledge needs to come back to the earth for the preservation and development of earth. Some scientists that I interviewed for this project, believe that colonizing space is going to help us to survive as a species. Others say that, with all this technology and all this knowledge we have on Earth, we need to better understand what is happening on our own planet.” She explains: “On Mars there was water and now there is none. This could happen on Earth.” So through studying what happened to other planets, we can better take care of our own. “We need to be aware of this”, Monica stresses, “the way it is going now is that we are generating new ecology and economy outside of Earth but we need to bring the conversation to Earth as well.”

Monica notes that people are surprised that her work was not made by a man. This prompts her to ask herself, why the audience expects this and what kind of work is expected of a female artist? She finally arrived at the conclusion that it makes sense to have her work made by several people. “I like to make a point of this because it points to a lack in diversity of voices and the stories that are told. We need to be aware of this for it to change; for us to grow and become more enlightened as human beings and as a society.”

Monica is interested in the fact that her work is about what is considered to be a very male subject. “Don’t you think, that, if this is the case, how much we haven’t seen yet? How much of history have we not seen, especially in visual language, because of now realizing what everyone – men and women – has made. What have we missed in our development because of this? I think it is humbling. Maybe we will become hungry again because we don’t know as much as we thought we did.”